CPR focuses on improving and protecting human rights in Criminal Detention facilities as well as Immigration and Control facilities in order to comply with the International Standards. Its goal, set in 1995, is to achieve, ultimately, the abolition of death penalty in Japan.

The main activities of CPR are:

Every three months CPR publishes a newsletter including reports on particular events such as seminars hold from time to time in Japan, the presentation of some judgments precedents relative to prison conditions, or observations about foreign detention facilities. You too, take action and become a member of our supporting team!

The Centre for Prisoners’ Rights (CPR) receives many queries from the inmates of detention centres, prisons and other penal institutions, as well as from their families and friends. A large number of these queries involve serious issues regarding the medical care received by the people detained. This booklet was therefore created to address these issues, and we hope that it provides a certain amount of help in ensuring the physical and mental health of inmates as they prepare for their return to society.

Disclaimer: This English-language version is produced by the Center for Prisoner Rights in collaboration with the British Embassy Tokyo.

CPR has been producing different kinds of documents and reports about death penalty in Japan, both in Japanese and English, in order to submit them to the relevant organizations ( for instance, the Human Rights Committee and the Committee against Torture).

Presentation of our Projects – Achievements

CPR investigates to fully grasp actual living conditions in Japanese prisons, points out the issues within the institution, and proposes some improvements. At the occasion of the periodic report submitted by the Japanese Government reviewed by the UN Committee against Torture, CPR submits an alternative report and sends a delegate team to Geneva in order to present a necessary counter point of view on the matter to the Committee.

CPR receives phone calls, letters, fax and emails from inmates’ families and friends related to detention facilities. Our Prison Life Advisor (a person specialized in support consultation) corresponds with them in detail.

3. Our Achievements so far

Right when CPR was created, between 1994 and 1995, a series of incidents happened in Japanese prisons. They involved the leather handcuffs used in so-called “protection cells” which severely constricted the inmates’ abdomen and led to various ill-treatment cases. CPR got proactively involved in those cases and provided defense lawyers, and supported other defense lawyers in similar cases of abuse. Unfortunately, most of the cases lost in court (if the courts had made the correct decision at that time, the tragic incident that happened later at the Nagoya Prison might have been avoided), even though a few cases won in court.

In 1998, after gathering a lot of information through the different lawsuits and investigations related to these cases, CPR was able to produce an alternative report for the 4th Periodic Review of the Japanese Government by the Human Rights Committee, before sending a delegation of its own to Geneva. As a consequence, the Committee expressed its concern regarding the frequent use of protective measures such as leather handcuffs that may constitute cruel and inhuman treatment. Moreover, the Committee officially addressed several recommendations regarding the overall life conditions in Japanese prisons.

The following year, in November, the Japanese Ministry of Justice issued a new directive regarding the use of “protection cells” and leather handcuffs. After this directive, the use of the handcuffs decreased sharply (for instance, in the Fuchuu Penitentiary near Tokyo, the number of cases dropped from 191 in 1995 to 3 in 1999). However, a detention facility remained opposed to this new trend. In October 2002, the so called Nagoya Prison Case was revealed: 3 inmates who had been placed in a “protection cells” either died or were gravely injured. After this event, CPR provided an extensive support to the National Diet Investigation Commission. Thanks to this action, after being used for a long time to torture people, the use of leather handcuffs was finally abolished.

In March 2003, when the Ministry of Justice decided to start a committee for the Council on Prison Administration Reform, CPR’s member Koichi Kikuta was appointed to be part of the council. CPR launched a vigorous lobby advocating for a deep reform of the penitentiary institution in order to comply with international human rights standards, such as expanding the inmates’ rights to communicate with the outside world, limiting the use of solitary confinement and improving the health care system in prisons. Even though the new “Act on Penal Institutions and the Treatment of Sentenced Inmates” (amended in 2006 into the “Act on Penal and Detention Facilities and the Treatment of Inmates”) passed, numerous issues remained and were denounced by the First Review of Japan by the UN Committee against Torture in 2007: for instance, harsh punishments in prisons and the insufficient communication with families and friends. The Committee also expressed a strong remonstrance regarding the use of “protection cells” and solitary confinement facilities. The following year, in 2008, at the occasion of the 5th periodic report from the Japanese Government to the Human Rights Committee under the ICCPR, CPR and the Japan Federation of Bar Associations (JFBA) joined their own recommendations. These recommendations demanded legal reforms of the appeal system, the Penal Institutions Visiting Committee, the solitary confinement system and strongly advocated for the abolition of death penalty.

In addition, from 2008 CPR actively campaigned for the abolition of death penalty as the most essential point of the general prison reform. To do so, CPR joined Amnesty International Japan for a campaign called “We can do without the death penalty”. CPR assured the co-secretary of this campaign.

CPR continues its struggle for a radical revision of the Japanese Prison Administration Law today to improve inmates treatment and abolish death penalty. 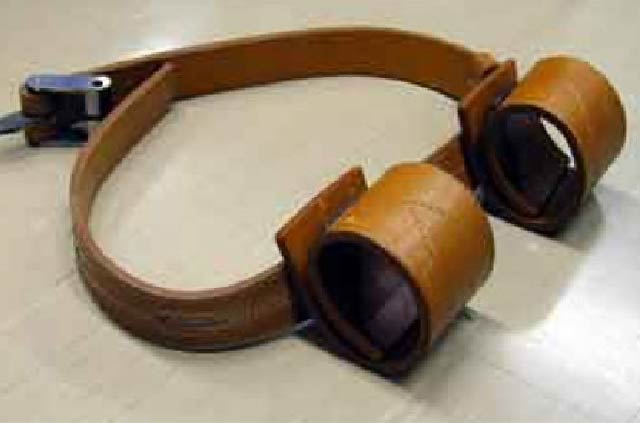 Replica of leather handcuffs made by CPR. Inside the leather belt there is a metallic piece, and two bracelets are attached. One hand was cuffed on the front while the other was cuffed in the back, resulting in a very uncomfortable and sometimes dangerous position for the prisoner. The space between the belt holes is quite wide, often around 10 centimeters. 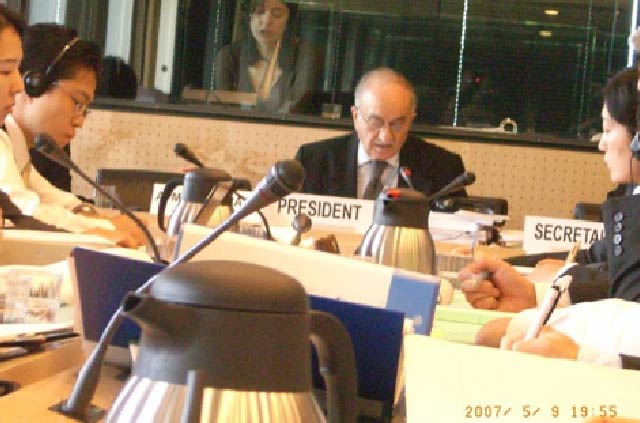 Investigation Meeting of the Committee against Torture. 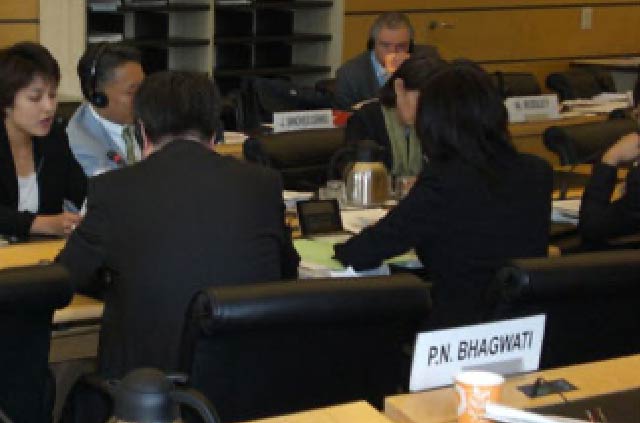 Meeting of the Human Rights Committee under the ICCPR for the 5th periodic review of Japan.